Some aspects of GeoGig can be tuned or controlled through runtime arguments.

GeoGig uses a local, in-memory cache for revision objects (features, commits, trees, etc) in order to alleviate the load to the backend storage and speed up some operations.

This cache is shared among all the repositories being used by a single JVM, using an LRU (Least Recently Used) eviction policy.

By default, this cache will use up to 25% of the maximum available heap memory on the Java Virtual Machine where it’s running. So, for example, if your JVM is ran with the -Xmx4G argument to set a maximum heap size of 4 giga-bytes, GeoGig’s cache will consume up to one giga-byte of memory.

This default cache size can be changed through the GEOGIG_CACHE_MAX_SIZE environment variable or Java system property, with the later taking precedence over the former, and can later be changed at runtime by connecting to the JVM with a JMX client or through GeoServer’s User Interface as shown bellow.

The GEOGIG_CACHE_MAX_SIZE runtime argument value can be expressed in terms of a percentage of the JVM’s maximum heap memory, or as an absolute value. through the following format:

In either case, the maximum cache size cannot be higher than 90% of the JVM’s maximum heap size. If so, the maximum cache size will be reverted to its default, following the precedence rule: if it was given through a System property, will revert to the value of the GEOGIG_CACHE_MAX_SIZE environment variable. If the environment variable is not present or holds an invalid value, reverts to the internal default of 25% of the maximum heap size.

How to pass the GEOGIG_CACHE_MAX_SIZE argument as either an environment variable or system property depends on your running platform and the environment GeoGig is running on.

The GeoGig revision objects cache holds a number of statistics such as current cache size, memory usage, number of cache hits and misses; and it’s maximum size can be changed at runtime through a JMX client such the Java Monitoring & Management Console or through the GeoServer’s plug-in user interface.

The JMX bean is configured under the org.geogig:type=shared-cache object name. For a running JVM with geogig, you can connect to it using the standard jconsole application, connect to the JVM process of interest, select the MBeans tab, and browse to the shared cache as shown bellow: 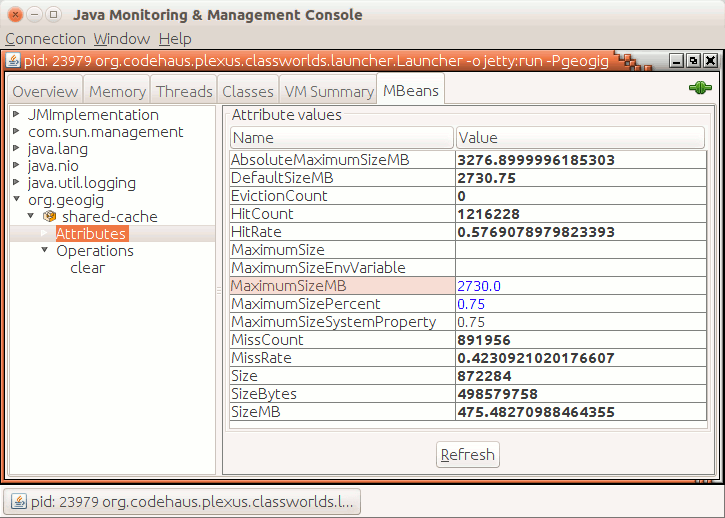 On the org.geogig/shared-cache/attributes dialog, you’ll see a number of cache properties, of which the MaximumSizeMB and MaximumSizePercent are editable and allows you to change the cache’s maximum size value in MB or as a heap percentage, respectively.