This document is a short introduction to the main ideas and elements of GeoGig. It describes how to set up and use GeoGig to version spatial data, introducing the following operations:

This tutorial assumes no prior experience with GeoGig. More details can be found in later sections.

Follow the instructions on the Installation page to install GeoGig.

For the purposes of this tutorial download the sample data HERE.

This zip file contains point locations of parks maintained by the City of Raleigh, named Raleigh_Park_Locations. Each version of the data has already been slightly modified in order to simulate an example workflow. 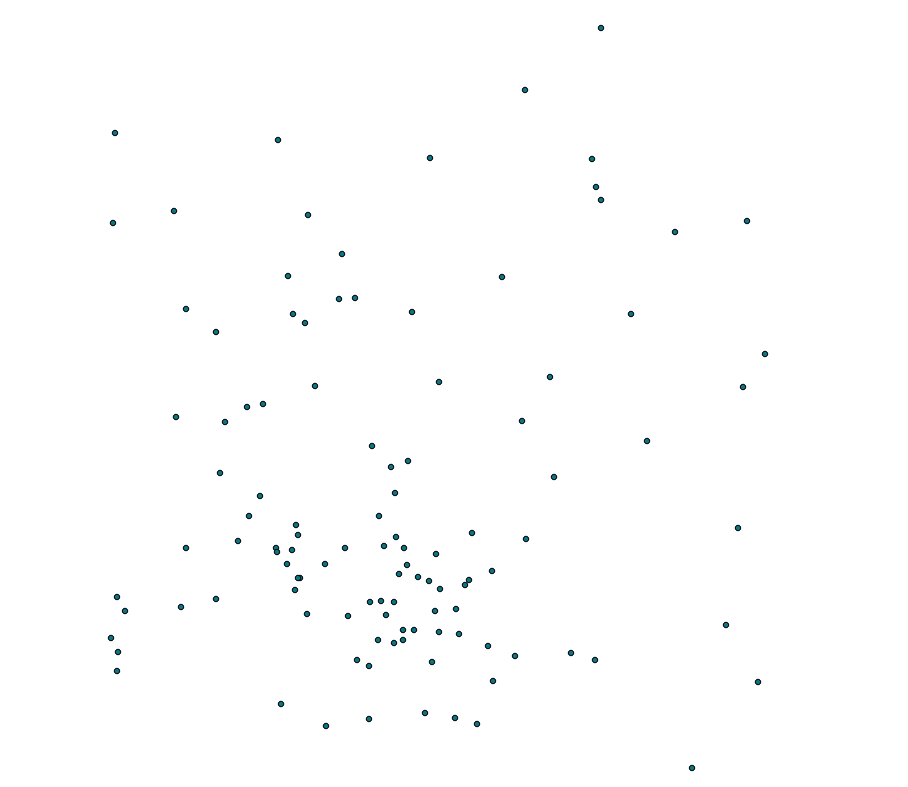 Before we start working with geospatial data in GeoGig, you must provide GeoGig with a name and email, using the config command, substituting your name and email:

We must create a new repository. Create a new folder to contain the repository and extract the data zip into that directory. Initialize the GeoGig repository by typing:

Now your GeoGig repository is ready to manage and version your geospatial data. Note that a .geogig directory was created.

To work with data in GeoGig, it has to first be imported into the repository working tree.

We will start by importing the Raleigh Park Locations shapefile using the following command:

The data from the shapefile is now in the working tree, but it is not yet versioned. However, the data is now in a format that GeoGig can understand, such that it may be aware of any changes to the data you might introduce.

Run the following command to verify that your data is in the working tree.

Running the status command will give you information about the data you have that is not already versioned.

To tell GeoGig that you want to version data in the working tree, you have to add it to the staging area. Do this by running the following command.

Now your data is ready to be used to create a snapshot (a commit in GeoGig terminology).

If you run the status command again, you will see a different output, since your data has now been added and is ready to be versioned.

The staging area is the last area before the data gets versioned in the repository database.

Committing means to create a new version of the data which is in the staging area.

The text between quotes after the -m option is the commit message, which should describe the snapshot in a human-readable format.

We will now simulate making an edit to our parks layer. The parks_plus_1feature/Raleigh_Park_Locations.shp file contains the same data as the original parks file, but with an added feature. Import this file.

To do this, follow the same procedure as before: import data, add, and then commit.

All editing of data must be done externally to GeoGig. If you prefer to make your own edits, you can do so using QGIS or any other GIS software you prefer.

If you run the status command after importing (and before adding), you will see elements which are not yet staged for commits. GeoGig will only report modifications to features that have been changed.

Then commit to create a new version:

You can use the log command to see the history of your repository. The history consists of the listing of commits, ordered in reverse chronological order (most recent first).

Data editing can be done on multiple history lines of the repository, so one line can be kept clean and stable while edits are performed on another line. These lines are known as branches. You can merge commits from one branch to another branch at any time.

The -c option tells GeoGig to not only create the branch, but also, to switch to that branch. Everything done will now be added to this new history line.

The default branch is named master.

Now use the parks_plus_2features/Raleigh_Park_Locations.shp file. Once again - import, add, and then commit. This shapefile contains the same data as the last version, with yet another feature added on.

Merging commits from a branch¶

Our repository now has two branches: the one we just created (myedits) and the default branch (master). To see all the branches within a given repository, execute the geogig branch command.

Let’s merge the changes we have just added from the myedits branch into the master branch.

First switch to the branch to which you would like to apply the changes, in this case it is master. Execute the geogig checkout master command to switch to the master branch.

The log command will show the following history. Use the --oneline option to compact the output:

Notice that the most recent commit (with the message “added new feature”) is missing. This is because it was added to the myedits branch, not the master branch (the branch we are currently on).

To merge the work done in the myedits branch into the current master branch, enter the following command:

Now we can see that the latest commit introduced into the myedits branch is also present in master.

We just saw that the work done on one branch could be merged automatically to another branch without problems. This is not always possible, in which case it needs to be done manually.

To see this in action, create a new branch named conflict_res, and create a commit based on the parks_1st_change/Raleigh_Park_Locations.shp shapefile.

This is the same data as parks_plus_2features/Raleigh_Park_Locations.shp, however the new shapefile changes the name for ‘Walnut Terrace Park’ to ‘Walnut Terrace Field’.

Now go back to the master branch and create a new commit with the data in parks_2nd_change/Raleigh_Park_Locations.shp.

This is the same data as parks_plus_2features/Raleigh_Park_Locations.shp, however the new shapefile changes the name for ‘Walnut Terrace Park’ to ‘Walnut Terrace Grove’.

This is a conflict situation, as the same data has been changed in two different manners in the two branches. If you try to merge the fix branch into master, GeoGig cannot automatically resolve this situation and will fail.

You can see that there is a conflict by running the status command:

An unmerged path represents a element with a conflict.

The output indicates that the value in the NAME attribute of the Raleigh_Park_Locations/1 feature is causing the conflict.

The conflict has to be solved manually. You will have to merge both versions yourself, or just select one of the versions to be used.

That puts the conflict_res branch version in the working tree, overwriting what was there. This removes the conflict.

Now that the conflict has been resolved, you may commit the change. There is no need to add a commit message, since that is created automatically during a merge operation.

You can add a “tag” to a version to easily identify a snapshot with something more descriptive than the identifier associated with each commit.

To do so, use the tag command:

Now you can refer to a specific version of the data with a name.

Data can be exported from a GeoGig repository into several formats, ready to be used by external applications.

To export a given tree to a shapefile, use the shp export command.

This will create a file named my_parks.shp in the current directory that contains the current state of the repository.

Past versions of the data can also be exported by prefixing the tree name with a commit ID and a colon, as in the following example:

Use “HEAD” notation to export changes relative to the current working revision. For example, HEAD~1 refers to the second-most recent commit, HEAD~2 refers to the commit prior to that, etc.

In our situation, we created a new repository from scratch using the init command. But if we wanted to start with a copy of an existing repository (referred to as the origin), use the clone command.

Let’s clone the repository we have been working on. Create a new directory in your file system, move into it and run the following commands (replace ‘YOUR_FIRST_REPO’ with the actual name of the first directory created)

With the repository cloned, you can work here as you would normally and the changes will be placed on top of the changes that already exist from the original repository.

You can merge commits from the origin repository to this new repository by using the pull command. This will update the current branch with changes that have been made on that branch in the remote repository since the last time both repositories were synchronized.

To move your local changes from your repository into origin, use the push command:

Congratulations! You now know the basics of managing data with GeoGig.

Check out the rest of the GeoGig manual in order to learn more!